A key problem for cognitive science is to explain the structure and evolution of language, given its centrality to modern human behavior and mind, and their origins. Unfortunately, progress can be hampered by two faulty assumptions: one that language is special, the other that it is not. The former, conventional stance, assumes language is special, unique, without evolutionary precedent. It therefore struggles to explain the evolution of something complex from nothing. The latter stance reflects more recent comparative research in animal communication which has been extremely productive. However, some segments of comparative research, particularly that focused on nonhuman primates, have appropriated core linguistic constructs such as semantics, meaning, information, syntax, intentionality, and used them in loose and metaphorical ways that fundamentally distort their linguistic significance in an effort to demonstrate continuity to language. This approach risks trivializing distinctive properties of language and overstating continuity with primate communication, thereby leaving little to explain about the evolution of language. In this talk, I will try to better align comparisons between the two groups by highlighting the importance of low-level features of communication indisputably common to both including: common features of vocal anatomy, voice production and resulting vocal signal structures as well as conserved processes of voice perception and perceptuo-cognitive biases that together undergird fundamental dimensions of social communication important to both kinds of primates. Embracing these foundational building blocks opens a variety of possible productive avenues for future research in language structure and evolution. In particular, I will suggest that perceptual and cognitive biases that promote certain types of ‘signal-meaning’ mappings provide a natural, bio-semantic substrate on which more robust communicative systems can by built. 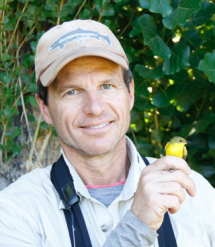 Dr Drew Rendall is professor of Biology and Psychology at the University of New Brunswick. He is interested in the structure, function and evolution of communication systems. He worked for many years on nonhuman primates – monkeys – but now works on birds where he is particularly interested to understand the evolution of song complexity and the underlying proximate mechanisms that support their production.

Coffee will be served before the talk.

Accessibility: The talk will be held in an accessible building (note that the wheelchair-accessible entrance is on McGill-College; the entrance from Sherbrooke St has a few steps). Participants are invited to make us aware of any barriers to their participation or any accommodations that we can provide. info@crblm.ca