Turning Down the Noise: Recent Research on How Our Brains Filter Auditory Information

As the holidays approach, many of us are exposed to noisy situations: cocktail parties for work, the business of a shopping mall, or large family gatherings. Our brains are hard at work filtering out the things we don’t want to hear so we can focus on what matters. How does this work, and what happens when the noise is just too much?

Recent research from the CRBLM delves into this phenomenon, which goes by various names, including “speech in noise,” “hearing in noise,” or the “cocktail party problem.” It is the act of separating a sound object (a word, a voice, a cell phone alarm, etc.) from its auditory background. Here is a visual example: 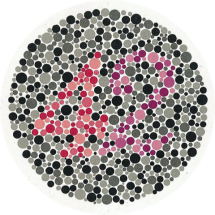 A visual analogy for hearing in noise.

To find the object in the image above, you need to make use of its color contrast (note: some colorblind people might not see anything). If you have seen this kind of image before, you might expect it to contain a number, which will help you identify it with less effort. Likewise, for identifying a sound object, we can use the cues from the signal itself (pitch, volume, harmonics, etc.) as well as our previous expectations of what we should be hearing (a particular word or sentence, a friend’s voice, a harmony line in a choral piece). However, when the object and the background are less distinct, this can become more challenging: 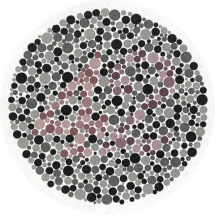 Now for a harder one!

Here, you might have still been able to see the number, but don’t be too smug— you just saw a better version of the same image. Remember, expectations matter! Try it on someone else, showing them the second image only, to simulate a difficult “speech in noise” situation.

People with normal hearing are good at picking out a speech signal in a noisy environment, but even when we are successfully able to perceive speech, we may be using more cognitive effort than if the environment was quiet. This higher cognitive effort can be measured by pupil dilation and increased brain waves in a certain frequency range (alpha). Spending more cognitive resources on speech perception leaves fewer resources left over for remembering the speech afterwards, as Zhang and colleagues are showing.

Work from the Montreal Bilingual Brain Initiative (MOBI; Kousaie et al., Grant & Kousaie) suggests that for bilingual people, working in one’s second language can affect the amount of cognitive effort needed to perceive speech in noise. The later you learn a second language, the more effortful speech perception is. In very difficult situations, like listening to a second language in noise, the brain may reach some sort of saturation point in cognitive effort. The group demonstrated this using different measures of cognitive effort: fMRI activity in the anterior inferior frontal gyrus, alpha wave power measured by EEG, and perceptual scores, which all told a similar story. See this BrainPost article for some details on the fMRI study.

There has been much debate about whether a musician’s training makes them better at hearing in noise. Studies looking at this question vary widely, using different kinds of target signals (from single musical tones to full sentences), and different kinds of noise (from white noise to other people talking). Coffey, Mogilever, & Zatorre concluded in a recent review article that, overall, musicians do have an advantage. It’s possible that the musician advantage exists only under specific conditions or with certain stimuli, which would account for much of the variability in these studies. 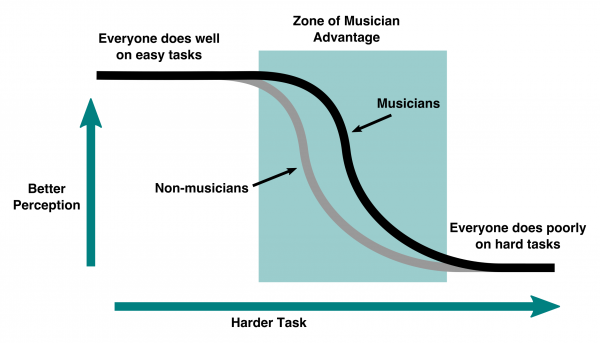 Many have wondered whether the musician advantage could be due to music training itself or to other factors like genetics, personality, or socio-economic status of musicians. However, Coffey et al. point out that there are long-term studies showing benefits of music within individuals, even when people are randomly assigned to music training and control groups.

So why does this musician advantage exist? One hypothesis is that musicians spend a lot of time learning to perceive fine-grained differences in pitch, which then helps them separate information from different sources. That would seem logical, but work from Deroche and colleagues suggests that musicians can’t always make better use of pitch cues to detect sentences in noise. Again, the type of stimulus and the difficulty of the task matter, and there are other factors at play like prediction and alternative cues in the stimulus. See an alternate perspective in Coffey and colleagues, who created a parallel “music in noise” task.

No matter how good you are at filtering it out, continuous exposure to noise may have an enduring effect on the brain, inducing maladaptive plasticity. Thomas and colleagues exposed adult rats to persistent low-level noise for two weeks, which disrupted the specialized neurons in the auditory cortex and brought them back to a flexible, “plastic” state. The neurons could then be re-programmed to be sensitive to different sound frequencies. However, after this re-programming, the rats in the study also showed signs of hyperacusis (hypersensitivity to noises).

Often, brain flexibility or “plasticity” is portrayed as a positive thing. However, this is not always the case; anything that disrupts the well-ordered system of basic perception may have serious consequences down the line:

This has implications for human health as well. Dr. Sylvie Hébert studies hyperacusis (and a related disorder, tinnitus) in humans. These disorders seem to be caused by hearing loss, concussions and noise exposure. What’s the common thread? It might be that the brain, in trying to get a better signal, is amplifying noisy auditory inputs, whether from external noise, or neuronal noise. Thus, in both animals and humans, noise can affect our perceptual system and lead to cognitive difficulties.

So… have fun at your parties this season, but remember to turn down the noise when you can! It’s healthy for your ears and brain, and it will help out folks who are hard of hearing, speaking their second language, or those just mentally fatigued. Let’s be mindful of our soundscapes!