Singing Birds and Signing Apes: What Animals Can Tell Us About Hearing, Speech, and Music

Often, research about auditory processing here at the CRBLM focuses on humans. But for this article, we will highlight research about other animals and how they compare!

Speech and music are themselves collections of many auditory and motor abilities. To better understand the evolution of speech and music, we need to compare a number of species, and see which ones have these separate abilities, and which ones don’t. This is called the comparative approach.

Another way to get at basic sound processing is to measure the frequency-following response, or FFR. FFR is an electrical signal generated by neurons that locks into the fundamental frequency, or pitch, among other aspects of a stimulus. It is related to pitch perception and even synchronization to a beat. Ayala and colleagues demonstrated that rhesus monkeys have an FFR similar to humans, again showing that basic auditory perception is similar across species.

But what about more complex auditory abilities? Ravignani and colleagues promoted the comparative approach in a recent review focused on rhythm in speech and music. They cited a number of species with complex rhythmic behaviors: some, like cockatoos and sea lions, can synchronize flexibly to a beat, adjusting their movements to different speeds of a metronome. Many of these species also display vocal learning, or the ability to imitate sounds made by other animals or the environment. Other species, like the orca whale and harbor seal, have a hierarchical structure to their vocalizations—in other words, their vocalizations have nested layers of repeating patterns, just like human speech! 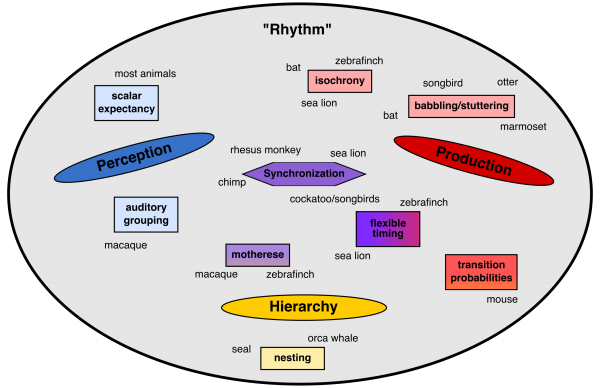 Some of the auditory-motor skills that might be considered under the umbrella of “rhythm” and the names of some animals that have been shown to possess these skills. Based on Ravignani and colleagues.

The characteristics of vocal learning, beat synchronization, and hierarchical structure are spread across the species, and just because a species has one does not necessarily mean that they have all of them. The fact that these abilities seem to be present in different branches of the tree of life suggests that they may be a result of convergent evolution (when a behavior evolves multiple times due to its usefulness in certain survival situations).

Work on songbirds is informative in this regard, showing that these creatures’ songs have a number of features in common with human speech, despite their evolutionary distance from us. In the wild, juvenile zebra finches learn songs by listening to adult males, called tutors. However, James and Sakata recently raised some birds without tutors and instead played random sequences of zebra finch “syllables” over a speaker during their formative years. Even with this random tutoring, the finches grew up to produce sequences that resembled their naturally tutored cousins. The fact that zebra finches settled on a specific syllable order regardless of their upbringing may represent some biological or learning-related constraints to the zebra finch song. Some of the characteristics of these syllable strings also apply to human speech and music, like the lengthening of a syllable at the end of a phrase or the arc of pitch in a melody.

However, though zebra finch song shares much with human speech, songbirds in general have big differences in vocal behavior between the sexes. Male songbirds are the “performers,” who sing the song to win a mate. Female songbirds don’t sing, but are the “judges” of song quality, choosing their mates based on the song. In an impressive use of small-animal fMRI, Van Ruijssevelt and colleagues identified two new regions involved in female zebrafinches’ evaluation of birdsong. They installed these female finches in the scanner, then played them two kinds of male songs: courtship songs as well as undirected songs that a male finch would normally sing alone. The females’ right caudomedial mesopallium and the left caudocentral nidopallium responded more to the courtship song. Further testing indicated that the second area seemed to be the most selective to courtship song, while the first area might just be responding to acoustic aspects of the song. Though females do not sing for courtship, they still need highly developed auditory processing in order to generate an appropriate response to a singing male.

Looking closer to us in the evolutionary tree, Loh and colleagues from the Petrides lab reviewed evidence to show that non-human primates already have most of the neural architecture commonly associated with top-down vocal control, with the exception of the larynx (the structure in our throat containing the vocal cords). In humans, the larynx is controlled more directly, receiving commands from supplementary motor area, premotor and ventrolateral prefrontal areas (see image below). This means we can learn to use it in a flexible way to create precise vocal sequences. In contrast, for other primates, control of the larynx goes through a relay point called the “periacqueductal gray,” which is less precise and more related to emotional vocalizations or innate cries, rather than being under explicit cognitive control. 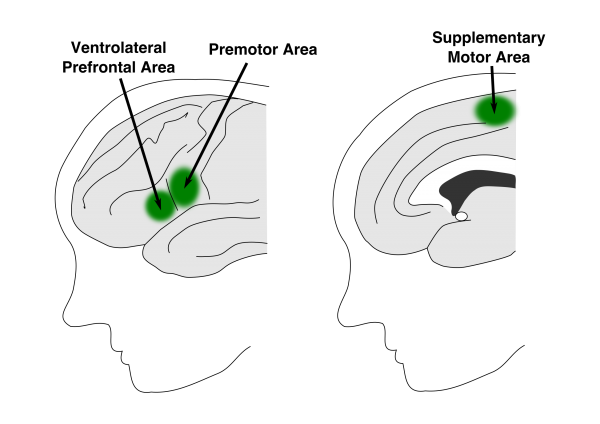 Areas involved in laryngeal control for humans. On the left, the outer surface of the brain is depicted; on the right is an image of the brain split down the middle. Based on Loh and colleagues.

The stories of apes like Koko, Kanzi, and Washoe align well with this. They are not able to speak, perhaps because of differences in control of the larynx among other physiological limitations. However, they do show aptitude for learning words in sign language. In other words, their communicative skills are more advanced than one might guess from their ability to speak. Thus, asking whether animals have speech and whether they can communicate are two different things.

The journey to understanding animal audition and communication is very instructive. It forces us to ask better questions, re-think our definitions, and de-center ourselves in the web of life. More discoveries are sure to come!